The evening before the trip, the forecast wasn't looking all too good. We'd heard reports of a foot of snow in some parts of the Peaks, and none of the weather forecasters could agree on whether it would be snow and wind, or sun all day. We set off anyway, and the closer we got to Stanage, the better the weather seemed to get. At Stanage Edge we were greeted by gale force winds, but at least the sun kept poking its head out!

We started off the day with the basics; gear placements. After a run through of all the types of gear placements, and how to make sure gear is bomber, we let the group loose with a club rack to wander along the crag finding some placements. With the help of our volunteer teachers, they then discussed each others gear placements, whether they were good, and how they could be improved. Fortunately the bottom of the crag was slightly more sheltered from the wind, but the same couldn't be said for the top where Dan and Adrian were busy setting up some top ropes. They couldn't hear each other or us in the strong winds, but their voices carried clearly straight down the crag, which led to some great entertainment for us.

The next task was to teach how to build an anchor, which we did at the bottom of the crag so we could actually communicate while teaching. We went through both in reach and out of reach anchors, and let everyone have a go at building both. After this, the weather took a turn for the worse, so we took the opportunity to have a lunch break and hide from the snow in whatever make-shift 'caves' we could fit in.

The snow/hail/whatever it was passed quickly, and in no time it was time to start getting people up a wall. With the top ropes now set up on a selection of easy routes, everyone got to do some pseudo leading. Despite the snow passing, the wind was only getting stronger at the top of the crag, so after having their anchor checked over, we let each leader walk back down without having to belay their second up.

Many wind-swept climbers and a lot fizzy worms later, which as it happens are very fun to throw from the bottom of the crag to Noah at the top (the fizzy worms, not the climbers), it was time to pack up and leave. The weather may not have been ideal, but for a cold day in February it better than we expected! After the traditional post-Stanage stop off at Chesterfield McDonalds, for a feast of burgers and McFlurrys, the tired Stoats finally made it home. 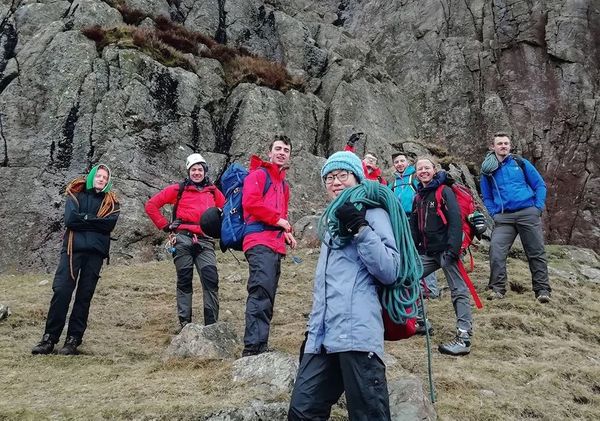 The Midlands Association of Mountaineers are our 'parent' organisation, taking on many ex-stoats after they graduate. Read on to find out why you should join!