Many thanks to Richard for letting us share this on our site, it's a great read for a summary of what Scotland can be like!

I've just returned from a week of mountaineering in the Cairngorms and a lot of fun was had by all! The trip was organised by UBMC's excellent Mountain Secretary, Matthew.

The weather, unfortunately, was not cooperative - conditions were excellent in mid-December but a marked thaw led to a lot of snow loss in the mountains.

On the first day, I went on a fact-finding expedition with Teddy to see if we could locate any snow. On first appearances, Coire an t-Sneachda was fairly bare of snow with only Jacob's Ladder appearing almost full. There was a rocky section in the middle of the route so we bypassed it and headed for the back of Sneachda near the Goat Track where we put crampons on with the aim of ascending 0.5 Gully.

While the snow had softened significantly, there were some higher quality patches along the route and it was an enjoyable ascent, giving me a chance to try out my new crampons. It was also my first winter lead, though Teddy has plenty of experience in winter himself!

We were expecting storm force winds so were surprised to find that the wind wasn't too strong! Upon heading down to the top of the Goat Track, however, we were wary of what appeared to be a cornice - upon meeting George, Will and Adrian, who had come up 0.5 Gully after us, we decided to head along the ridge via Stob Coire an t-Sneachda. At this point, Teddy and I bade farewell to the others and headed around the south of Cairn Gorm to look for snow.

After a bit of sliding down a steep snow slope, we made our way around the east side of Cairn Gorm and found quite a large patch of snow to the south of Ciste Mhearad. At this point we put crampons back on and head up the slope to make the summit. On our way we encountered many Ptarmigan and I sighted an elusive Snow Hare!

It was quite breezy on the way up to the summit but we persevered and I made my first ascent of Cairn Gorm, my eleventh Munro! We descended to the north east to take in the subsidiary summit of Cnap Coire na Spreidhe, then walked back down past the ski slopes. Later, we discovered that a wind speed of 110 mph had been recorded at the summit that day!

Energised from the first day and with no formal plans yet of my own, I was happy to join Ben on the first mega death walk of the week and Teddy was keen to join in as well!

I suggested an attempt at Braeriach, the third-highest mountain in the United Kingdom at 1296m. I suggested that we try to find a gully in Coire Brochain to the south of the main ridge, which would make the day a bit more interesting and everyone seemed to think this was a good idea!

With an estimated 23 - 25 km of walking to do, we set off from the Sugar Bowl car park at 07:30 with our headtorches on. It was raining fairly consistently throughout the first part of the day but we persisted and made it to the Chalamain Gap just as it began to get light - helpful as there were a lot of boulders to negotiate!

The Chalamain Gap marked the entrance to the Lairig Ghru, which we walked up for another couple of hours before beginning the long, boulderfield-strewn traverse around the south of Sròn na Lairige to enter Coire Brochain. At this point we were all cold and wet, and we were rewarded with a fairly disappointing amount of snow in our expected target, the West Gully, resulting in a large rocky section which would have blocked our progress.

Not to be deterred, we found another potential route up the West Flank and put our crampons on. The snow was extremely soft and, at one point, we had to cross a waterfall with some very loose rock around. Needless to say, we were all extremely cautious and we made it up to the ridge safely.

A short walk later in poor visibility and we reached the summit of Braeriach (1296m), my 12th Munro and second of the trip! Given the whiteout conditions, we took a bearing and set off, as we wanted to make sure we were back to the Chalamain Gap before darkness fell, but it was to our surprise when the cloud lifted and we were treated with sensational views across to Cairn Toul and Sgòr an Lochain Uaine, along with the side of Ben Macdui (the summit was in the clouds).

We were losing light quickly and just about made it back to the Chalamain Gap before it was dark - we made the traverse back across in similar light conditions to the morning! We finally returned to the car, with head torches on, at 16:50 - an excellent day.

With the 31st December having clear skies and low winds predicted, it was an obvious day for an attempt at the second highest mountain in the UK, Ben Macdui.

With a a horde of 18 people making up the group, and with perfect conditions, it felt more like a casual stroll in the park than a day of mountaineering! We made it up to the summit quite quickly and I made sure to get a group photograph taken!

On the way down we had a lot of fun sliding on the ice! Unfortunately my right knee began to complain and I decided to head down by the easiest route - thanks to Pauline's expert ministrations I was soon ready for the ceilidh!

We all headed to Grantown-on-Spey for a Hogmanay celebration in the town square! Having had a bit more experience of ceilidhs in the past few months I was able to help quite a few people who were less sure of the steps! It was an excellent night of celebration and a great way to spend New Year's Eve.

New Year's Day was a late start for most of us and we went for a walk to a nearby loch for the traditional skinny dip! It was good to see that several people did it properly and took all of their clothes off. I'm not as conditioned for cold water as I used to be and didn't spend too long in the lake but it was still an invigorating swim!

While I was still concerned about my knee, I was keen to get another Munro and I identified Bynack More as a good target. It was a long walk out and back, with 11km of walking in each direction, resulting in a 22km walk. The weather was forecast to be absolutely foul, with storm force winds and heavy rain predicted. Given the position of the mountain, directly behind Carn Gorm, it was likely that we would experience the full force of any winds.

Fran and Pauline were keen to join me for this endeavour! We set off just after sunrise and headed out. I was wearing my B1 boots, which was a welcome relief for my knee from the heavy B3 mountaineering boots. Upon coming to the ridge, the wind picked up, though the rain stayed relatively light throughout. It was only during the final push to the summit that walking became extremely difficult, with us often walking at quite an angle to the wind and having to take shelter or crouch down!

We made the summit without too much issue: my thirteenth Munro! Heading down we met several other groups, many of whom had thought better of attempting the summit. Of course, being from UBMC we were made of much sterner stuff!

We next enjoyed a trip to Aviemore and lunch in the Ski-ing Doo, always a highlight of the trip! A quick trip to the gear shops and we returned to the hut triumphant - another mega death walk done!

There was a temperature drop predicted for Friday 3rd and I was keen to head out to the Northern Corries again. There was a lot of pessimism among the group, with some people being told that they wouldn't need crampons!

This theory was proved wrong quite quickly - conditions had markedly improved since earlier in the week and it would not be possible to get up the Goat Track without crampons! Myself and Richard split off from Tom, Lauren, Dora and Pauline, with the aim of ascending Jacob's Ladder, both for the first time!

We came to the bottom of the route and prepared for the ascent. While we had a rope and gear with us, we both decided that we were comfortable without and we started the climb. Richard was extremely helpful throughout, giving lots of advice on axe and foot placements.

While the gully is normally a Grade I, given the lack of snow it became a Grade II route and it was my ascent of a Grade II climb without a rope! Overall the climb was quite straightforward and I felt confident with my crampons and technical axes throughout.

We met up with the rest of our group, who had ascended the 0.5 Gully. Those that had done the Winter Skills course earlier in the week appreciated having the opportunity to practice the skills in actual winter conditions, realising the importance of learning to cut steps and to be able to ice axe arrest!

Heading behind Cairn Lochan, we found an excellent patch of névé to play with and lunched in Richard's 8 man shelter. After a bit of practice in descending, traversing and ascending with crampons, we had a bit of arrest practice, both with and without an ice axe!

After setting up a rope to re-ascend, the fun began. Tom had brought a beer tray with him and he tried out the slide while sitting on it - he picked up a lot of speed! Unfortunately, he put his foot down and the tray and him went separate ways - the sight of him running after the (never again seen) tray was a sight to behold! Lauren tried out an IKEA bag which was also effective, though not quite as fast.

Myself, Lauren and Richard returned via the Goat Track while the others escorted a gentleman and his dog who were somewhat unprepared for the conditions. Descent is always unnerving in winter so it was good to get some more practice, We returned just before it was completely dark. Overall, it was an excellent day and it was fantastic to experience some actual winter conditions!

That evening, we headed to the all-you-can-eat Italian buffet to round off the trip. Intent on beating my record of 26 pizza slices from the previous year, I put on a strong showing of 30 slices (plus dessert of course!).

Overall, the trip was a fantastic experience. I got a lot of winter leading done and bagged a few more Munros. I soloed a Grade II climb and learned some extremely valuable skills. Hopefully, some mountains nearer to home will come into condition over the next few weeks - I will be very keen to head out again! 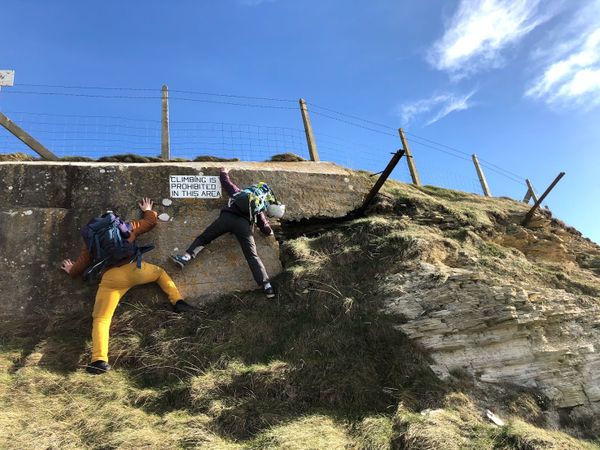 A quick and easy guide on how to become a paid member of our club. 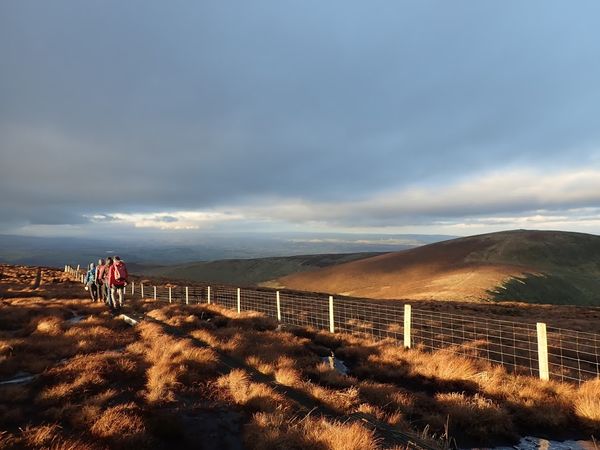 Our excellent guide, Tom, went through a lot of fundamentals of navigation with the group: pacing to measure distances, bearings, travelling over difficult ground, identifying features on the ground and navigation in poor visibility.