Day 1: Return of the Stoats

Awaking early on an unnervingly warm winter’s day, an eager group of stoats descended upon the Munrow to make the annual pilgrimage to Scotland. The intention was, as usual, to climb some mixture of snow, ice and rock although the somewhat abysmal weather forecast had lowered psyche. Ramming as much as physically possible into the space where two seats used to be located in the minibus, we finally started our journey north of the wall at a reasonable 9:30 am. The trip was generally smooth and uneventful, however Max did learn a valuable lesson after asking “How bad can the back seat of the minibus be?”. We arrived at the hut around 8pm, ate some dinner and went to bed dreading the early start ahead.

The merry crew of stoats were awoken at the refreshing time of 6:45, and everyone was rushing about trying to be ready to leave at 8am. Due to the inevitable club faff we were 15minutes late, leaving plenty of room for improvement. We set off with and the course people were dropped at the lower carpark, with the remainder heading up to the higher carpark. Greg, Sam and Richard chose an interesting route up to the plateau via Sneachda before dropping down to Loch Avon and then up a rather mudder and heather filled ridge back to the lower carpark; whilst Chris, Nathan, Ed and myself attempted to reach Ben Macdui. Our efforts were, however, thwarted by poor visibility and high winds which ultimately caused us to walk around aimlessly finding things to walk up and slide down. Despite the lack of snow those on the course still managed to get a very valuable day out on the hill learning a range of different mountain skills.

After our truly exciting yet uneventful day out we returned to the hut. Looking at the forecast we decided that a day out on the hill the next day was unlikely, and so plans were formulated for a day in Aviemore and a trip to the cinema for a late showing of Star Wars (…again).

Day 3: Attack of the Rain

Wednesday saw a rise in temperature and a heavy onslaught of overnight rain ensured that pretty much every ounce of snow melted. This warranted the only lie in of the trip, as there wasn’t all that much to do. The people on the course headed out onto the hill in an attempt to consolidate some skills. The old gits headed out for a run or two where James and Jake managed to conclude that a river had burst its banks whilst stood atop a bench with water around their ankles. The rest of us headed to Aviemore for the day to inspect every single gear shop in the town. We also made a stop at the Skiing-Doo for a spot of lunch before heading to the Spey Valley Cinema to watch Star Wars (again). Our merry Aviemore crew then returned on the dodgiest public bus ever. The people on the course also headed to Aviemore to watch a later showing of the new Star Wars film. The best part of the day was, however, the annual Nethy Bridge race night. This event was amazing and it’s hard to understand how it has slipped under the radar for so many years. The long and short of it was that Paul managed to get well acquainted with one of the locals (Anne) and all in attendance got pissed on a mix of port and wine whilst betting on horse races from the 80s. Oh and Jake won some talc in the raffle.

New year’s eve saw conditions get a little better, and so we ventured forth into the mountains. A group of us headed out with the intention of summiting either Cairngorm or Ben Macdui. After heading up to the top of the goat track we split up, with those keen for a frosty and speedy walk heading up Ben Macdui and the rest going for Cairngorm. Both groups were equipped with walkie talkies and we kept regular contact to assess progress. For some reason I chose the codename Red Badger and allocated Flying Stoat to Chris. Both teams were successful in their summit attempts.

Those who didn’t head into the mountains headed to the Link boulder for a spot of bouldering. The conclusion of the day was that Owen is a beast (with those forearms is any surprised?) and that Youcef has an impressive ability to channel his inner salmon whilst climbing. The old gits attempted to hire bikes, however there were no bikes…anywhere.

After returning to the hut the New Years Eve games were set in motion. For some they proved very difficult to get a hang of, but everyone ended up a little pissed and some ended up a bit too pissed. Whilst playing “My penis is…” Youcef decided to ask “So…is anybody circumcised?”. I’m just going to leave that there.

We headed for the nearby town of Grantown-on-Spey after pre-drinks and proceeded to ceilidh unti; we could hardly walk. It was, once again, a great night.

Day 5: Revenge of the Stoat

New years day showed the most promising conditons and so a few different groups headed out to climb some snow/ice. Old gits headed up The Couloir in Lochain and others stoats made it up Central Gully, Aladdins Mirror, The Slant, The Runnel and Fiacaill Ridge. Overall the day was a success, although poor conditions of Aladdins Mirror caused Richard, Owen and Adam C to have a late walk off. Around 200m from the carpark Adam C slipped dislocated his knee (it popped back in about 30s after) warranting assistance from myself and Chris who were awaiting the teams return in the minibus.

After returning to the hut and patching Adam C up, we soon after headed for A&E in Inverness. After about 4hours Adam was armed with his crutches and we headed back for some sleep.

Some key quotes from the day:

Youcef on serving pies: “It’s like delivering a baby, innit? Don’t worry about the mess, just get it out.”

Youcef on sex scenes in films: “They must take hormones, because otherwise they’d get too excited and just whack it in anyway.”

Day 6: The Wind Strikes Back

Saturday saw a dangerous increase in wind speed, and so a day on the hill was off the cards. Instead plans were made for running, skinny dipping and wildlife parking. The old gits headed for “The Run” from Loch Morlich back to the hut. A small group headed over to the Wildlife Park in Kinguisse where they were very disappointed by the apparent lack of Red Panda. The rest of the gang headed to Loch Garten to get out of the hut. For some the reason for heading to the lake was solely skinny dipping (Greg). About 7 of us stripped off after we found a suitable dipping spot out of the way of prying eyes. We took tentatively to the water and quickly realised that we had made a mistake, it was Baltic! Paul quickly took a photo of us and Sam dipped his balls in the lake and we were out of there.

We all headed down to La Taverna later on in the day, where there was far less weird stuff done with the pizza than last year. We headed over to the Doo Below afterwards to celebrate Sam and Richards birthdays.

Some key quotes of the day:

Nathan after Greg offered him and orange: “I’m not a fruity person.”

Ed in reference to how long you should last in bed: “You’ve got to keep them wanting.”

After looking at the weather forecast at midday on Saturday I was hopeful for the weather on the Sunday. I shouldn’t have been. High winds, poor visibility, high temperatures and no chance of us heading into the hills. Instead we faffed for a long time wondering what we could actually do. None of the breweries or distilleries were open and so we headed for Aviemore. After having a lovely breakfast in the Happy Haggis, Richard led a group to Loch an Eilean (the one with the “castle”) with a few others heading to do a bit of work in a nearby café. Once the walkers returned we headed back to begin packing and cleaning.

We were all set to wake up at 7:30 but the hut was not content with that late a start. The fire alarm somehow triggered at 4:30, ruining what was set to be a lovely night’s sleep. We managed to turn it off though, so that was good.

We packed up and left at 9:30. Youcef doesn’t like “All of Me” by John Legend so we played it on repeat, “Any Old Iron” style.

Thanks to everyone who came and see you next year!

You can burn snow if you heat it up too quickly.

Buckfast is made by a group of monks down south.

Santa likes Christmas time because he gets to find out where all the naughty girls are.

If you have two arms then you have more arms than the average person.

If the Earth stopped spinning, everyone would die as there would be instant 1000mph winds.****

If the batter tried to hit a ball pitched at 90% the speed of light it would cause a nuclear detonation.****

* - May not have actually been said by Nathan. 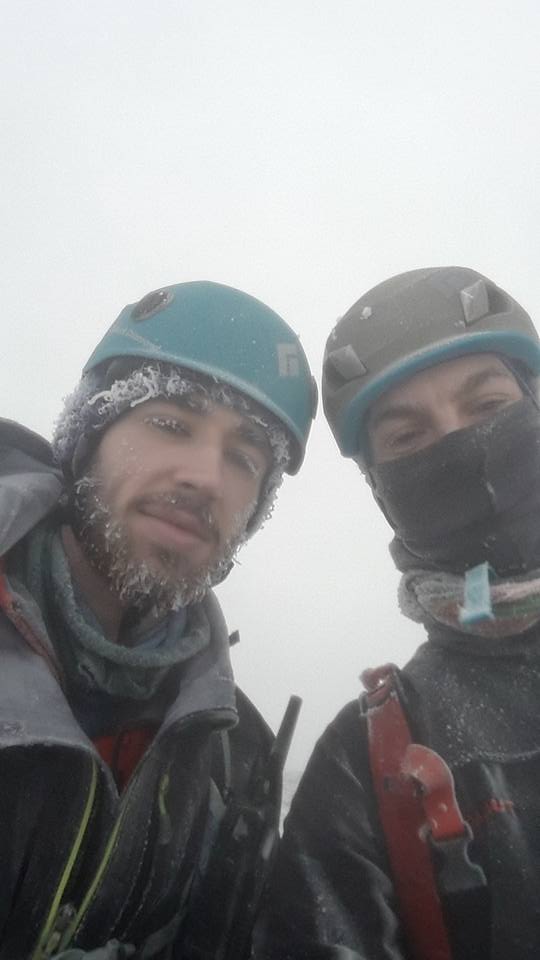 The week leading up to Annual Dinner the UK was hit with Storm Eunice, uprooting trees on the green heart and hurling wheelie bins across Selly. As a result, we had to delay the trip by a night as we would have been leaving in the peak of the storm.