On Friday evening, it seemed as though the journey to Ogwen might be a tad uncomfortable for backseat passengers with ice axes and crampons to transport! Luckily, all was solved when Old Git Noah gave us a helping hand, providing space in his van.

For many stoats, it was their first time on a UBMC trip. And we were delighted to hear that, despite the perils of lockdown, a few of them had already met and climbed together outside of the club.

We arrived in a rather windy and wintry Ogwen valley (though it was hard to tell from the cosy atmosphere inside Glan Dena hut) with a weekend of navigation practice and scrambling ahead of us. In preparation for our January trip to Scotland, Saturday was dedicated to everything winter navigation! We spent the morning indoors, learning about maps, compasses, route cards, and navigational techniques (rest assured, a copious amount of caffeine was consumed in the process!). This was followed by a practical exercise in the afternoon, where groups followed their pre-planned routes and successfully traversed the Y Foel Goch horseshoe. Overall, the navigation day was a great learning opportunity for the Scotland-bound Stoats - the Welsh Mountains even did their best to replicate the wet and windy conditions of the Cairngorms!

Of course, it wouldn’t be a true UBMC trip without a smidge of trad climbing. And so, whilst the navigators stayed in the warm hut, Jon led a handful of robust and intrepid stoats up to the crag for a day of top-rope sends and numb fingers!

Sunday was scrambling day and Old Git, John Luckett, took charge to lead the stoats up an enjoyable ridge scramble to the summit of Moel Siabod where they were greeted by a welcome dusting of snow. With a limited number of B2 boots and experienced leaders, it wasn’t possible for everyone to tackle the more technical routes. Nevertheless, the scramble provided a fantastic introduction to the activity without the worry of crampons and axes. Meanwhile, MAM members, Tom Green and Phil Pavey, took another three stoats on a quest to find some elusive winter conditions. And, following a short scramble up Y Gribin ridge, two of the stoats donned crampons and axes for their first time, as the group continued to the snowy summit of Yr Wyddfa (Snowdon).

All in all, UBMC’s first dedicated scrambling trip was a success (even if some climbing did sneak its way in!). But there’s no doubt that, following their first taste of winter, the stoats will be fired-up and ready for our first Scotland Trip since 2019/20! 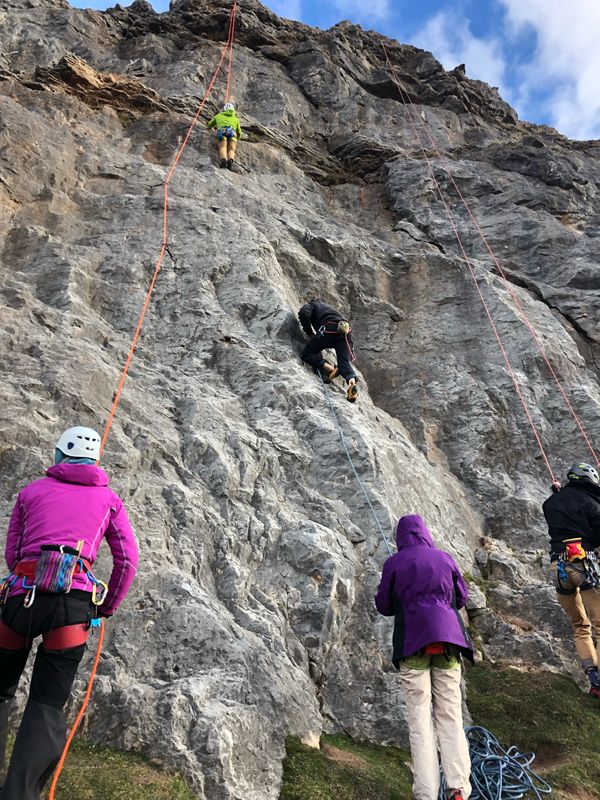 North gate was full by 7am on Saturday morning by excited Stoats and a load of Aussie Rules players also waiting for their transport. We left just as the sun